Discover the treasures and marvels guarded within two of Seville’s most important monuments. Both places simply can’t be missed.

The Giralda is one of Seville’s most famous buildings, if not the most famous. It is the bell tower of the Cathedral of Santa María de la Sede, reaches nearly 100 metres high and is a symbol of the city. In fact, no other building in Seville exceeds its height. 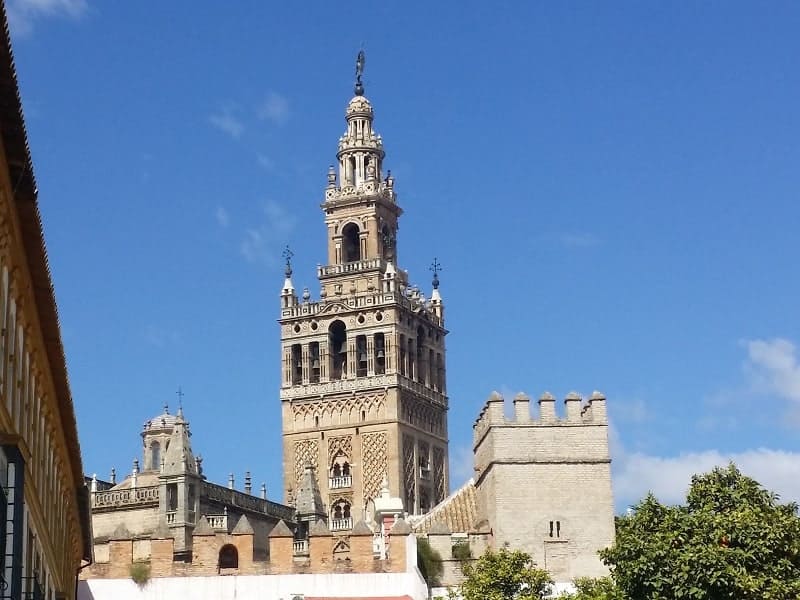 The Giralda, even though we know it as part of the cathedral, traces its origins back to the times of Isbiliya, the Muslim Seville. Construction on the minaret of the city’s mosque began around the year 1184, under the orders of Abu Yaqub Yusuf.

That first phase of construction is what is seen today as its base, at the height of Plaza Virgen de los Reyes, where tourists are commonly found. You can see in this lowest part how the Giralda was initially constructed out of stone, including stone blocks from Roman times and even tombstones.

However, after the death of Abu Yaqub Yusuf, the work was resumed by Alí de Gomara, who chose to continue its construction in brick. And this is what is most characteristic about the Giralda, the geometric shapes of brick that travel across its entire length.

However, all of that is its Muslim appearance. In the 16th century, the Giralda was equipped with bells. And therefore, between 1558 and 1568, the final piece of the tower was added, again in stone and with architectural forms in the Renaissance and Baroque styles. And all of that crowned with a huge sculpture of the personification of Faith, a figure commonly known as El Giraldillo.

Today, the Giralda has been declared a World Heritage Site, and it is one of the most-visited places during a trip to the Andalusian capital, since you can also climb up to its highest part in order to take in a wide view of the city’s historic centre.