Best options to see the tower

The Tower of Gold is one of the greatest symbols of Seville. And like all symbols, it has plenty of history and is associated with many legends. The tower’s origin dates back to the 13th century, when the Almohad governor of Seville decided to build this tower on the banks of the Guadalquivir River in order to watch the channel and river traffic. Between 1220 and 1221, the first 30 metres of the tower were built. 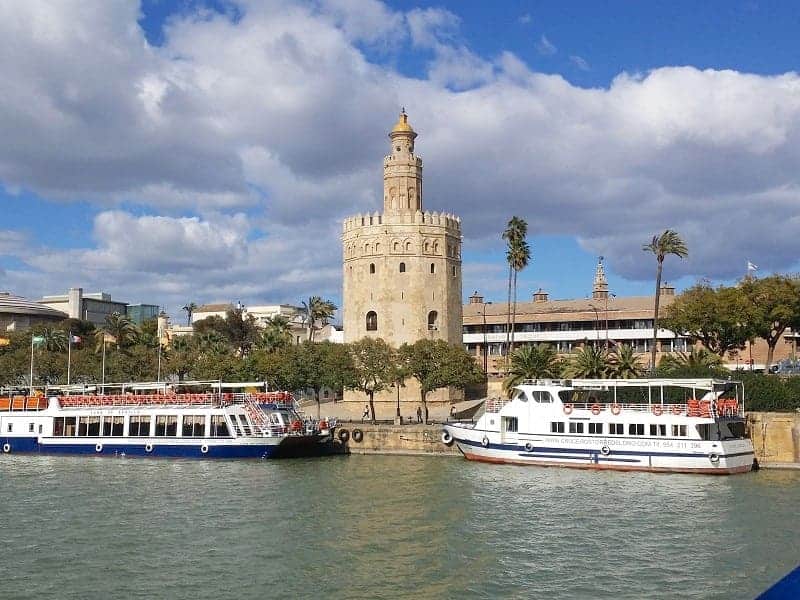 Later, in the 14th century, King Pedro I the Cruel sponsored the building of eight metres more, following the same design of a twelve-sided shape. Then in 1760, the final touch was added: its cylinder and dome, bringing it to its current height of 36 metres.

That is the story of the Tower of Gold’s construction so far. But the legends that surround it must also be known. It is said that it gets its name because it was originally covered in tiles, over which the sunlight would create golden reflections. However, a recent restoration has rejected this possibility, and its colour is due to a peculiar combination of limestone and straw that were added to the stones of the tower.

And the second legend about the tower is that its name is because precious materials were guarded here, which arrived to the port of Seville from America. Given its proximity to the port and its aspect of power, it could safeguard goods, but the vast majority of gold passed directly from the boats to the neighbouring House of Currency.

However, independent of the legends, the truth is that the Tower of Gold is one of the emblems of Seville, both today and in the past. For example, after the earthquake of 1755, the building was badly damaged, and demolition was even considered. However, practically the entire population of Seville opposed this idea and managed to keep it standing. And so it stands today, as one of the most visited monuments of the city, for its beauty and because the Naval Museum of Seville is housed inside.